All of history depends on memory which is one of the reasons why I needed to write my story. I want my words to be part of a legacy that not only hails the human spirit but gives credence to the survival of beauty, kindness and love in a world that seems to have gone mad. Although fear, intolerance and injustice still exist, we are experiencing a time when the power of love and light is manifesting and bringing us to the understanding that we are all ONE  emanation of a Divine power. Our stories sustain us, establish our place in time and space and link us to the rest of humanity.

My story is a  piece of the puzzle of the survival of spirit. Last fall, David Brooks of the New York Times asked people over 70 to write what he called “The Life Report.” I saw it as an opportunity to look at the memoir I had just written, which helped me to understand my past. Having lost most of my family in the Holocaust, the ghosts of the past still haunted me.

My story is a legacy to the memory of the family I lost, and also to the power of believing in a force that has guided me through chaos and challenges.

When I was four years old, my father grabbed my hand, pulled me out of an attic window, and dragged me over rooftops in Brussels, Belgium to escape the Nazis. My mother and four other siblings were not so lucky.

I was saved and given sanctuary in a convent in the  Belgian countryside.  It was an act of heroism on the part of the nuns who risked their lives in the face of great adversity. It has taken me a lifetime to understand why I survived. Very early on I knew that to be a Jew was to be different.  I also learned that there are people in the world whose love and compassion go beyond these distinctions. The loving nuns in Belgium and the Catholic women (siblings of the Mother Superior), the three sisters I called “les tantes,” who protected me throughout my childhood, have been my role models throughout life.

My father survived the war. When I was twelve we left Belgium to go to America to live with his sister in Brooklyn. I felt displaced not only because I couldn’t speak the language but also because I missed my Catholic family. School became my salvation. Within six months I learned English. I knew early on the importance of knowing other languages. I spoke Polish and Yiddish as a child. When the nuns took me into hiding, they immediately taught me French. But Belgium is a bi-lingual country so I also learned Flemish. Les tantes, proud of their heritage as women from the Ardennes, taught me the dialect known as “Walloon.” I was one multinational child! 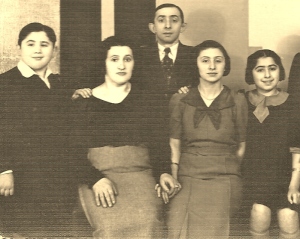 In high school I became the protégée of the head of the language department, Dr. Albert Schwartz. We bonded immediately when he told me that he had lost family members during the war. They lived in Antwerp and were all deported. I was assigned students to tutor in French. I also excelled in other subjects and looked forward to going to Brooklyn College. But no one in the family approved of it. My aunt said her daughters were secretaries and that would be good enough for me. My stepmother did as well (my father had remarried). I decided to go to work part-time to pay for books and general fees which were very manageable in those days. I was not going to let myself be defeated by anyone who knew better than me what to do with my life. My father had always told me how stubborn I was.

I majored in education and French literature and became a teacher of French in the New York Public School System. I could not have chosen a better career. I used to say to myself “They pay me to do this?” I almost didn’t get licensed because I wasn’t quite five feet tall and that seemed to be a requirement. But the very high heels I wore for the interview did the trick. I loved my students and they loved me. I often felt they were the family I didn’t have. Every single one of them was special to me. Within a week I had memorized the one hundred and fifty names of students on my roster. Many of them would come during my free time to confide their teen-age angst. I used a most unforgettable text in class. I know because to this day I have students contact me (Face Book being the culprit) to tell me how significant the lessons were that they learned from “Le Petit Prince.” This wonderful book for children and adults written by the French author, St. Exupery has sustained me through life as well.

What is essential is invisible to the eyes. It can only be seen with the heart.

That is probably the most important message I conveyed to my students. I also encouraged them not go to college right after high school, but to travel and learn other languages in order to meet people from other countries, cultures and worlds. When a Haitian population moved into the neighborhood I had the opportunity to learn about yet another culture, another view on life, another look into struggles and the will to achieve. I even managed to learn some Creole, sometimes with a humorous twist, such as when I talked about the Buddha, only to be told that in Creole it was the part of the body you sit on. A life lesson indeed.

See Part 2 of My Life Report