I love Paris. It is the keeper of a multitude of memories for me yet as I return yearly I am still dazzled by constant discoveries.

Upon arrival at the airport I am enchanted by the sound of the French language welcoming me into my new adventure. I know I will soon be sitting at a little café, blissfully inhaling the aroma of a cup of coffee while watching people flowing by.

I hail a taxi and within seconds the driver skillfully weaves into the traffic while I attempt to make my first observations. The cars are smaller and speed like jerky little boxes about to bump into each other. Yet on either side of the road it is all beginning to resemble the dehumanized New Jersey landscape. As if to compound my apprehension, traffic suddenly comes to a halt so that I can see and smell the landscape in slow motion. I gulp down my fear trusting the talkative driver reassuring me that all is well. But I can’t help wonder if the downfall has finally occurred and the city I loved irretrievably changed.

Then a comforting feeling reminds me of the novel I was reading on the plane, Freya Stark’s novel, “The Valleys of the Assassins” and I take solace in the statement “perhaps to find out what one thinks is one of the reasons for travel and for writing too.”  I’m totally captivated by her wisdom as that of Claude Levi Strauss who similarly felt that “Perhaps, then, this was what traveling was (is). An exploration of the deserts of my mind rather than those surrounding me.”  As I contemplate this wisdom sifting into my thoughts I realize we have arrived in Paris.  So much to drink in, sights whizzing by and street names I won’t remember.  All too fast to capture, speeded up as if I were watching an accelerated film.  I am relieved to reach my destination.  As I walk into the lovely apartment I have rented, I am suddenly struck by an enlightened awareness:  Never mind this world speeding into nothingness. I am opting for slow motion and will spend the next few weeks in Paris walking and writing to fill “the desert of my mind”.

My dearest friend soon came to greet me and we decided on a plan. She has been a Parisian practically all of her life and was thrilled at the idea of taking me on a walking adventure. She is not only a well-rounded scholar and lover of literature (French and English) but walks most of the time rather than taking public transportation. She confided that in her readings she learned that the great American writers Whitman and Wordsworth claimed to have been inspired by walking as it eased the mind. Of course the great Jean Jacques Rousseau wrote an entire novel confessing his experience as a solitary walker. He certainly was a perfect example of how loneliness makes things happen. 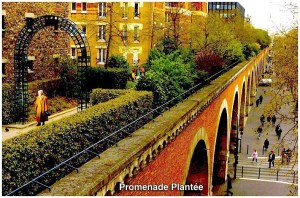 And before long, trying to keep up with my learned friend I “sauntered” into undiscovered areas of Paris: La Promenade Plantée, a High Line (the one that inspired the New York High Line in 2011) where the railway tracks atop the Viaduc des Arts have been replaced by a promenade planted with a variety of plants and…(to be continued)