Where do thoughts come from?

When I allow my mind to wander it comes up with random images and words that seem to float in from another world. I find it most fascinating as if connecting to an alternate reality or some collective imagination inspiring me to see and feel beyond the ordinary.

I do have a plethora of adventures to feed my wandering mind for a lifetime. Perhaps it isn’t so extraordinary then, when sitting in the ordinary surroundings of my living room to be summoned by thoughts of exotic music and places I visited in the past. A sound might recall the musicians I met in a village nestled in the foothills of Annapurna in Nepal. A spider sneaking past the window sill suddenly becomes the leader of thousands of white spiders that appeared out of nowhere one morning as I stepped out of my tent while camping under Mount Ararat in Turkey. A figurine on a bookshelf recalls the sacred shrines of worship I visited in desolate places in the valleys of Afghanistan where the wind seemed to whisper secrets from the beyond. 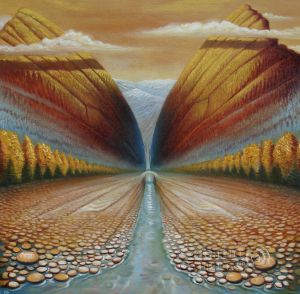 From there I traveled on a bus to Pakistan through the Khyber Pass and thought I would never live to talk about it. And perhaps I did leave part of my soul somewhere in the Hindu Kush mountains or the desert I saw in the distance beyond the wall of the house where I lived in Shiraz, Iran in the seventies.

I had no radio or TV to interfere with my thoughts back then and read lots of books and wrote poetry, which I addressed to my favorite authors. It was even easier to let my mind wander  as I wrote sentences using several of the languages I knew just like Salvador Dali did. I admired his ramblings and the imagery that sent my imagination soaring into surreal combinations. That was such a long time ago but here it is again, a morphic resonance linking the past and imposing itself on my random thoughts.

And my world is filled once more with sounds that paint images and dreams. I find a poem written by the French poet Andre Breton and am drawn into a surrealist fantasy —

And a bit further down on the book shelf I meet Mallarmé who inspired Debussy with his poem:

Yes, I understand you, Mallarmé

I understand your hermetic imagery

tripping into my thoughts

I wandered into your poetry

And touched by your symphony

Have added this, my melody

A Poem for Mallarmé

Summoned an artist to melt pastel into the air

And add licks of shadows around clouds bathed in pink

Inviting Orpheus to appear beyond the crests of the sea