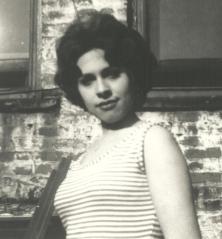 When I graduated from Brooklyn College I married a very rebellious young man who later became Alan Vega Suicide, one of the founders of the punk rock movement. Our marriage lasted ten years.

I thought I had been a good wife. In the sixties, that meant stick by your man no matter what. But that was impossible when the Ramones were colliding with my idol, Edith Piaf. By that I mean our tastes and habits were irreconcilable.

We divorced. I had a breakdown. When I recovered, I followed a young medical student to Shiraz, Iran. My years in Iran were the most fulfilling of my life. I met the Islamic world on a grand scale. I taught French at the University where I met a group of outstanding young adults. Whenever I asked them to translate words in Farsi they would remind me that I was there to teach them, not the other way around. I explained how wrong they were and then they went on to tell me about the mystics and the Sufis living in the area. It led me to a spiritual path that opened up a whole new awareness of being. I also traveled to Afghanistan, Nepal, and India where I encountered cultures I had only read about in books, and religious beliefs that made total sense to me.

Then I had the good fortune to go to Israel, where I reconnected quite by chance, with a woman I had known as a child in Belgium. She had been saved just as I had been. I learned that it was her sister who had placed us in the convent. This sister now lived in Brazil and knew the story of my family. So I went to Brazil and found the clues necessary for me to put together the puzzle of my early childhood and the family I had lost.

It took me ten years but I have now finished writing my memoir. It is a major accomplishment which fulfills a lifetime promise to myself. I gave it the title Mindele’s Journey – Memoir of a Hidden Child of the Holocaust. It was a soul searching endeavor, but in the writing I found the survivor, a spirit that resisted defeat. I learned very early on from the wonderful people who saved me, that love and compassion can overcome so many of our differences. I learned that no matter what happens there is a force that matches the will to overcome obstacles and challenges. Through our experiences we come to understand who we are, and what we are, in the world.

I have made mistakes along the way. The most painful one has been not having children. I never found a partner who stayed long enough for me to feel secure in bringing another life into the world. And I did not have the courage to face motherhood alone. Perhaps I should have been more persistent. Instead, I explored life and turned my love and compassion in other directions.

Click here if you missed My Life Report Part 1